I believe that this popup is not actually caused by DigiHUD, but rather the operating system has detected that an app on the device has created an overlay that is running when a Permission screen is being shown.

Permissions screens are very powerful, in that they allow third-party apps to control core functionality of the phone, read/modify/delete your sensitive information and even cost you money. Google want to ensure that no rogue apps can ‘interfere’ with your Permission choices by creating a screen overlay and using a technique known as “Clickjacking” (here’s a great Android-specific example: https://www.skycure.com/blog/accessibility-clickjacking/) to get you to unknowingly grant Permissions. This is potentially a very serious risk to device security.

So, any app running that is creating an overlay when a Permission screen is shown will cause this popup to appear, that’s if your device is using the new Permission system introduced in Android 6 Marshmallow. 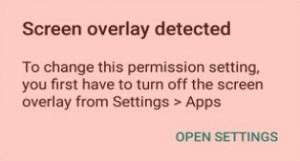 For any app that’s requesting Permissions, not just DigiHUD, just ensure that no apps are running that create overlays (apps like ‘Lux’ or ‘Twilight’ that create coloured screen filters or control screen brightness) when the Permission is being requested. Once that’s been done then these apps can be turned back on.

EDIT: I’ve found that in some cases the Important Information screen that appears when the app is installed for the first time was causing the warning to appear. This has been addressed and a new version of the free app has just been released.